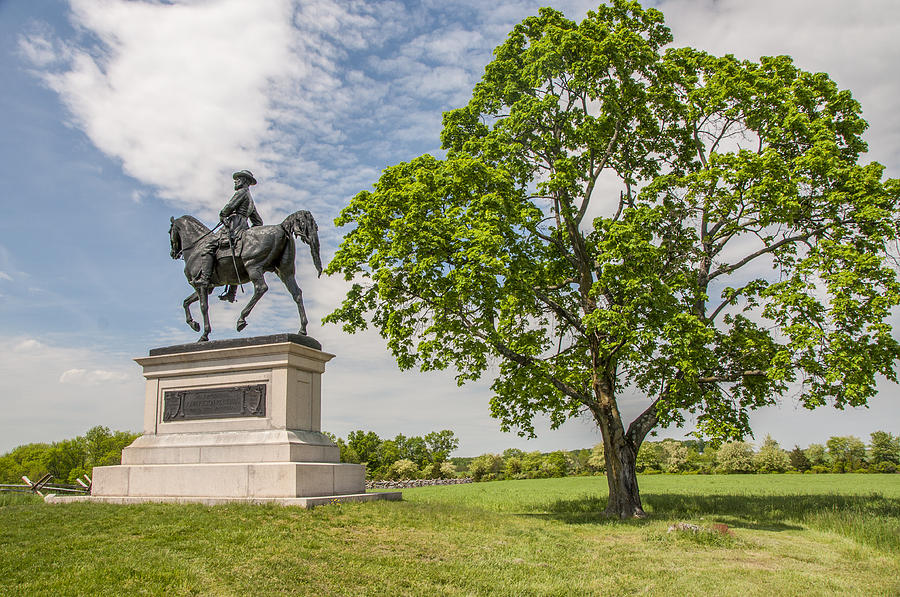 Major General John Fulton Reynolds was the highest ranking officer killed at the Battle of Gettysburg and one of the most senior in the Civil War. His decision to commit his infantry west of Gettysburg set the course of the fighting, but his death early in the battle was a serious blow to the Union Army.

There are four statues and monuments to General Reynolds on the battlefield of Gettysburg, a sign of the respect and affection he had earned.

An equestrian monument is west of Gettysburg on Chambersburg Pike (U.S. 30)

A monument marks the site where General Reynolds was mortally wounded on South Reynolds Avenue just north of Meredith Avenue.
The earliest of the Reynolds monuments and one of the first at Gettysburg is southeast of town in the National Cemetery.

The equestrian statue was sculpted by Henry Kirke Bush-Brown, who also did the Meade and Sedgwick equestrian statues and the bust of Lincoln in the Lincoln Speech Memorial, It was dedicated in 1899, with Reynolds' nephew Charles Reynolds Evans pulling the cord that unveiled the monument.

The statue weighs four and a half tons, yet is superbly balanced with only two of the horse's feet on the ground. The monument follows the unofficial rule (or coincidence) where a horse with two feet off the ground indicates its rider was killed in battle.