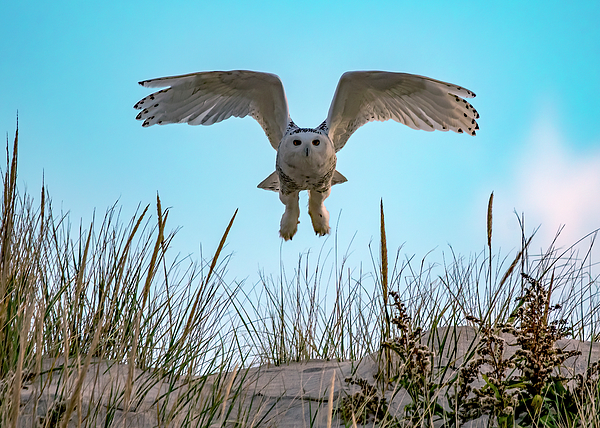 Our lightweight, microfiber tapestries are available in three different sizes and feature incredible artwork to complement any wall space. Each tapestry has hemmed edges for secure hanging with nails and/or thumbtacks.

The snowy owl, also known as the polar owl, the white owl and the Arctic owl, is a large, white owl of the true owl family. Snowy owls are native to... more

Cathy, what an awesome photograph! Not only is it a beatiful piece, how lucky you were to see this beautiful bird!

The snowy owl, also known as the polar owl, the white owl and the Arctic owl, is a large, white owl of the true owl family. Snowy owls are native to the Arctic regions of both North America and the Palearctic, breeding mostly on the tundra. It has a number of unique adaptations to its habitat and lifestyle, which are quite distinct from other extant owls. One of the largest species of owl, it is the only owl with largely white plumage. Males tend to be a purer white overall while females tend to more have more extensive flecks of dark brown. Juvenile male snowy owls have dark markings that may appear similar to females until maturity, at which point they typically turn whiter. The composition of brown markings about the wing, although not foolproof, is the most reliable technique to age and sex individual snowy owls.