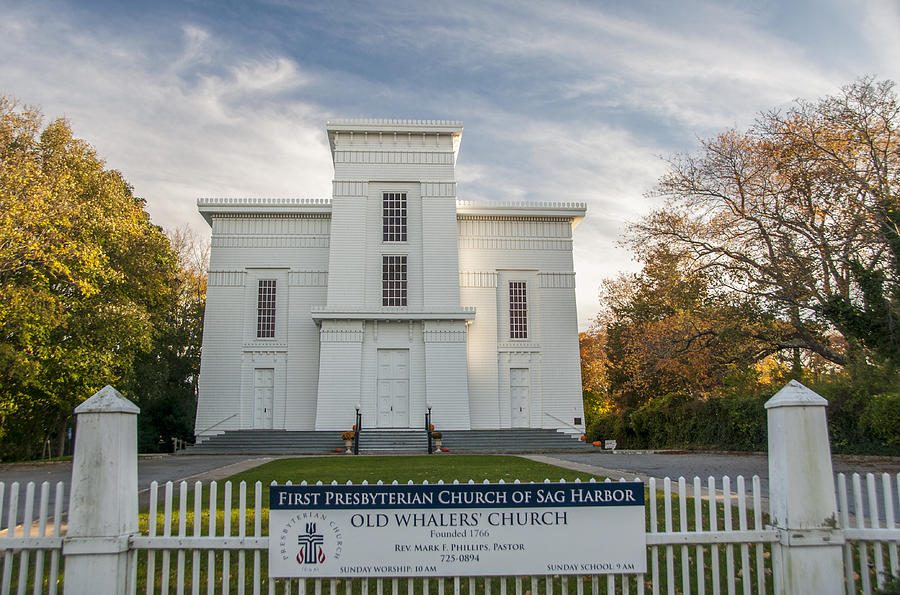 First Presbyterian Church in Sag Harbor, New York, also known as Old Whaler's Church, is a historic and architecturally notable Presbyterian church built in 1844 in the Egyptian Revival style. The church is Sag Harbor's "most distinguished landmark." Town boosters call the facade "the most important (surviving) example of Egyptian revival style in the United States,"and "the best example of the Egyptian Revival style in the U.S. today. The church was designed by Minard Lafever in an Egyptian Revival style that includes Greek Revival elements. Its original steeple, 185 feet high, was destroyed by the Great New England Hurricane of 1938. Although many lament the loss, architectural historian Richard Carrot believes that the removal of the steeple was "successful" in that it left "a more 'Egyptian' building." The church's tripartite facade evokes the massive trapezoidal pylons of Egyptian temples. The deep cornice is crested with a crenelation of blubber spades. The minister's dedicatory sermon made clear that the congregation's intention in erecting an Egyptian style building was to symbolize Solomon's Temple. The foyer features trapezoidal Egyptian Revival doors. The original bell is preserved in the narthex. It was taken out and rung for the building's 100th anniversary in 1944. The church also celebrated the anniversary of the building by putting on a grand historical pageant in the costumes of the 1840s. Appropriately, with many local boys stationed overseas, they sang a song known to have been sung when many local men left for the California gold fields in 1849: "Star of Peace to Wanderers Weary." The service was broadcast over the Voice of America as an example of the Four Freedoms. The interior of the sanctuary, however, is entirely in ornate Greek Revival style. It is spacious, with a capacity to seat 800. The pulpit is framed by a pair of pilasters and a pair of Corinthian columns that rise over 50 feet to a coffered ceiling. Trompe-l'śil behind the pulpi