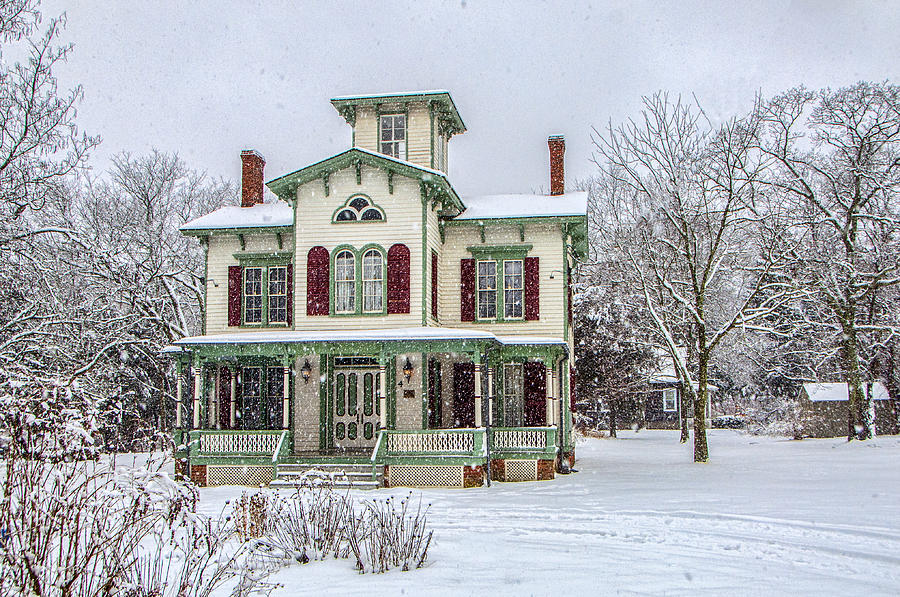 The Hawkins House in Yaphank, NY: Robert Hewlett Hawkins, born In 1817, was a seventh generation descendent of Robert and Mary Hawkins who arrived in Charlestown, Massachusetts, (now a part of the city of Boston) in 1635 from London, England.

At an early age, James H. Weeks, an influential business man from Yaphank, gave Robert a letter of Introduction to a prominent mercantile firm in New York City and, thus, began Hawkins� successful business career. In a short time, he amassed a fortune allowing him to form many ongoing personal and business relationships with a number of honorable businessmen.

In 1850, he constructed a residence (Robert Hewlett Hawkins House) on Yaphank Avenue, Yaphank, New York that was home to him, his wife Isabella (Sweezy) Hawkins, and their then three children, Elizabeth Tuthill, Isabella S. and Rebecca Larrissa.
Robert Hewlitt Jr., a fourth child, was born in 1856.

Mr. Hawkins retired from his active commercial ventures with the building of his home. He committed himself to taking care of his father who was completely blind (referred to as �Blind Robert�). Robert Hewlett spent his last few years comforting his father, guiding the old man�s faltering footsteps, and cheering up his lovely home by visiting and reading for him.

After a short illness, Robert Hewlett Hawkins died unexpectedly on December 16, 1856 in his thirty-eighth year, but his memory continues to live on with the restoration of his Grand Old House.

Since 1850, the Robert Hewlett Hawkins House with property has had fifteen individual parties in ownership and two parcels of property severed from the original tract. One in 1934 on the west for the purpose of residential use, and the second in 1936 to the north for the establishment of a gas station.

In 1974, by virtue of neglect and vandalism, the house was scheduled to be demolished, but with the formation of the Yaphank Historical Society in this very same year, demolition was stayed. The Society through a vigorous effort was successful in convincing the County of Suffolk (the house owner) to save the structure and and move forward with a restoration.

By way of a unique agreement in 1975, the Society became the Trustees of the house and property on behalf of the County of Suffolk and in a joint effort, both parties initiated what was to be an eighteen year project. In 1992, as a result of room and in field services, restoration was completed.

Because of the painstaking detail in the restoration and both the local and national historical significance of the site, the Robert Hewlett Hawkins House was placed on the National Register of Historic Places, our Country�s highest historical citation.

Congratulations on your win in Anything Architectural! Great picture! FLFB

Congrats on your win in the Victorian Architecture contest for this beauty!

Congratulations on your winning entry in the Victorian Architecture contest!

Just beautiful, love those old houses! Congrats on all its well deserved features!

Cathy this is such a lovley scene ... great find ... what a beautiful home!! and to capture it with the falling snow is just magic!! l/f

Cathy, Congratulations on your Feature in Wisconsin Flower and Scenery !

FANTASTIC!! Love the snow, the colors. What a great Christmas card! Instant v/f

It is with great pleasure I chose this piece of artwork from your portfolio to FEATURE on our homepage of the Wisconsin Flowers and Scenery group. This is the quality of fine art that makes it a joy to share with other artists and prospective customers. Love the beauty and composition of this skillfully presented piece of beauty. Thanks for sharing! Liked and faved Forever, Elvis Randy B. Rosenberger

Could this be more Currier&Ives perfect? ! Nice take, Cathy.

Beautiful house and winter scene! Looks like a Christmas card!

What a pretty house! It seems to be meant for this pretty snow scene!