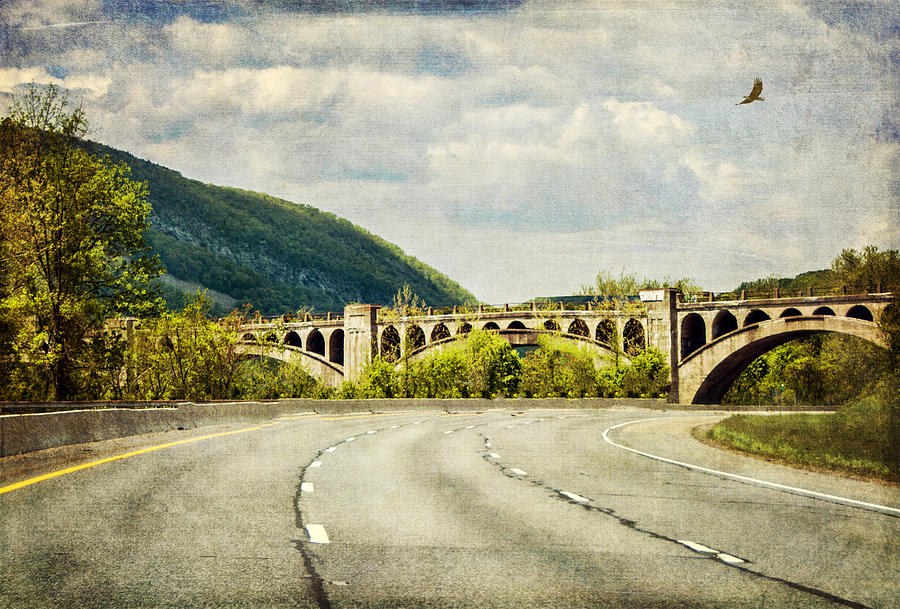 The Delaware River Viaduct is a reinforced concrete railroad bridge across the Delaware River about 2 miles (3.2 km) south of the Delaware Water Gap that was built in 1908-10 as part of the Lackawanna Cut-Off rail line. It is the sister to the line's larger Paulinskill Viaduct. The Delaware River Viaduct also crosses Interstate 80 on the east (New Jersey) side of the river and Slateford Road and the Lackawanna Railroad's "Old Road" (now Delaware-Lackawanna) on the west (Pennsylvania) side. Abandoned in 1983, it is part of a New Jersey Transit proposal to restore passenger service to Scranton, Pennsylvania.
The bridge is 1,452 feet (443 m) long and 65 feet (20 m) high from water level to the top of the rail, and is composed of five 150-foot (46 m) spans and two 120-foot (37 m) spans. The footings were excavated down to bedrock, which ranges from 26 feet (7.9 m) to 53 feet (16 m) below the surface.[1] A total of 51,376 cubic feet (1,454.8 m3) of concrete and 627 tons of reinforcing steel were used to construct this bridge.
Construction of the bridge was described in an article by Abraham Burton Cohen, then a draftsman for the Delaware, Lackawanna and Western Railroad, who went on to design the Tunkhannock Viaduct, an even larger structure on the railroad's Summit-Hallstead Cutoff.[2] The bridge was completed on December 1, 1910, about a year before the Cut-Off opened, which allowed construction trains to haul building materials to work sites east of the bridge.[3]
Originally envisioned as a curved bridge on a 1�30" curve,[4] the design was altered to a tangent (straight) stretch of track across the bridge, a 1�30" curve on the New Jersey side and a 3�30" curve on the Pennsylvania side of the bridge. While the original 1�30" curve would have allowed speeds of 80 mph (129 km/hr) across the bridge, the tighter curve required trains to slow to 50 mph (80 km/hr); no other curves on the 28-mile Cut-Off were sharper than 2�.
The viaduct is the largest reinforced concrete structure built with a continuous pour process. There is no known evidence to support the oft-told legend that several workers fell into the concrete during construction and could not be extracted because of the need to keep pouring.
The tracks were removed by Conrail in March 1989, five years later than the rest of the New Jersey section of the Cut-Off. The bridge has deteriorated more quickly than its sister, the Paulinskill Viaduct, perhaps because it spans a larger river, or perhaps because its design did not permit the addition of an inspection crawlway, alone among the Lackawanna's four concrete viaducts

Truly splendid, Cathy! I hiked both sides of the gap many times over the years. Also I did not realize there is a plan to restore train service across the bridge. I think that would be a positive decision for the region. L/F

Nice shot Cathy! I know this spot...you captured it so well! LF

Lovely colours in this Cathy, a beautiful image!